Ina And Jeffrey - 40 Years Together And Counting... 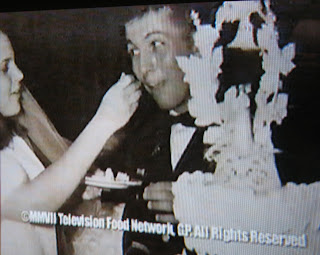 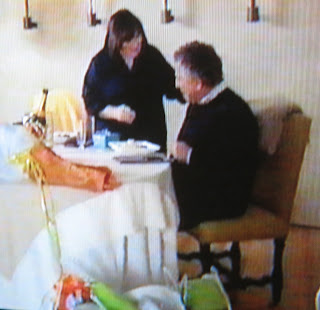 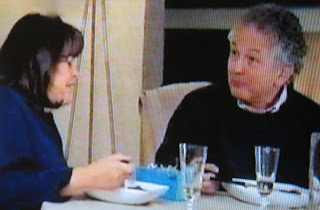 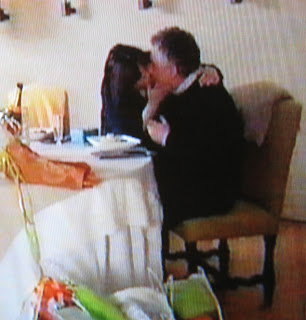 Italian Wedding Soup
Brownie Pudding
Campari Orange Spritzer
Ina and Jeffrey together are just perfect. Their chemistry inside and outside the kitchen is undeniable. Last week's show was a celebration of their 40th(!!!) anniversary.
We’ve celebrated a few anniversaries with the happy pair. I LOVED Ina's anniversary show from 2 years ago. It was an old show, so it was actually their 35th anniversary. It was the perfect mix of Ina and adorable Jeffrey with great food. This is how that celebration unfolded.
Last year’s anniversary show (their 39th) was pretty good too. THIS was my take on it. (Note: The pictures above are from THAT show.)

Anyway, on THIS show, Ina is planning one of Jeffrey’s favorite dinners and a trip down memory lane. She’s gotten a DVD made of their happy times together and she’s making a brownie dessert. “Brownies, Jeffrey and I go way back,” she confides.
For the brownie pudding, the lovestruck Contessa breaks 4 eggs in a mixing bowl. She tells us that when she was 16 and Jeffrey was 18, she used to send him brownies in a box and she’s sure he was the most popular guy in the dorm.
She beats in 2 cups of sugar, remembering when he brought her a box of brownies for their anniversary. (That was their 35th.)

Ina sifts ¾ cup cocoa powder with ½ cup flour. It’s got a molten thing happening in the middle, she says. Ina snips off the end of a vanilla bean and scrapes out the seeds and beats them into the eggs and sugar with 1 tablespoon of framboise. (I would make that cognac).
Then she beats in the dry ingredients and afterwards adds 2 sticks of slightly cooled, melted butter. That's an unusual way of doing things. Why, oh why is she adding the butter AFTER the flour and cocoa? Doesn't that risk overbeating the batter? Very different from MY brownie recipe. She adds that anyone that tries to make brownies without butter should be arrested. I’m with her on that one.

Ina pours the mixture into a buttered 9 by 12 oval baking dish. She says any similar size will work. She bakes it in a water bath to make sure it bakes evenly. She pours really hot water around and bakes it at 325°F for exactly one hour. She feels bad that Jeffrey is working.

Cut to Jeffrey not really working. He’s looking for a tent?!! to recreate their early fun times camping. Uh…ok, I guess after 40 years, he knows what she’ll like, but, frankly, two airplane tickets to Paris would have suited me just fine…

Ina is in her pantry reminiscing about many of the liqueurs she’s used in dishes for Jeffrey over the years.
I often do that…think about the marvelous meals I’ve created. But I’m not in a tricked-out pantry. Usually, I’m in the dusty basement, going down to the second refrigerator to retrieve some old, mystery food out of the freezer.

Ah, she remembers the pavlova she served with raspberry sauce and framboise; the coffee ice cream with coffee liqueur and the cognac in the beef bourguignon.

Ina takes the brownie pudding out of the oven. A toothpick should come out wet and it does.

She moves on to the Italian wedding soup with chicken meatballs. “We do know about Jeffrey and chicken.” Yes, well, Ina, you may have mentioned that a few times.

Ina takes out 6 oz. ground chicken and 4 oz ground chicken sausage, which have been taken out of their casings. She mixes that together with 1/3 cup fresh bread crumbs (made without the crusts). Fresh breadcrumbs make the meatballs softer than the commercial type.

She chops one clove of garlic and adds that to the chicken. Then 2 tablespoons of chopped fresh parsley goes in. (She NEVER uses it for garnish.) She grates 2 tablespoons pecorino and adds that with 2 tablespoons of Parmesan or grana padano. Ina mixes it with a fork and adds a beaten egg and ½ teaspoon of salt and ¼ teaspoon of pepper. Using a rounded teaspoon, she forms them into meatballs and puts them on a parchment lined baking sheet. She bakes them at 350°F for 30 minutes.

Jeffrey shows a picture of their old tent to the shop owner, who shows him one. It’s nothing like the old tent. After asking if a child could put it together, he buys it.

Ina chops ½ cup onion. She says she and Jeffrey like really low key birthdays and anniversaries and neither of them likes surprises. Uy boy, how’s she gonna like getting into a tent? I’m thinking it’s more likely that she would keep her herbs warm at night under the tent, before SHE would actually use it. She sautés the onion with chopped celery and one chopped carrot in olive oil.

She ruminates on marriage: “What’s the secret to a good marriage? I don’t know. I would hate to have a marriage that you would have to work at…We just have a good time together. He wants me to be happy, I want him to be happy. It’s so simple.” Well, if I were married to be Jeffrey, it WOULD be simple. Actually, if I were married to Ina, it would be REALLY simple.

She softens the vegetables for 8 to 10 minutes.

Ina adds 5 cups of chicken stock to make the base of the soup. She’s using homemade. She adds ¼ cup of white wine too. She’s the practical one, she says, and he’s the smart one. She tells us the time she left him home alone one time and he ran over his computer with his car.

Jeffrey goes out into the yard to assemble the tent. Oh my, it’s all over his head.

Back in the kitchen, Ina adds ½ cup of raw pasta to the soup. I’m very surprised at that. I NEVER and I mean NEVER EVER cook raw pasta in soup, especially if I’m using valuable-like-gold, homemade stock. The pasta sucks up all the liquid and you have to end up adding more stock or water. I always cook the pasta separately, quite al dente, and then add it before heating up the soup. I know Ina says she wants the pasta to thicken the soup, but No, no, no…Add it when it’s already cooked.

Jeffrey has the tent out on the ground, but it keeps collapsing. He sort of does it.

For cocktails, Ina adds 5 ice cubes to each glass. She pours ¼ cup of Campari (made of 61 different ingredients, Ina mentions) in each glass with ½ cup freshly squeezed orange juice. She fills it up with “bubbly water”. She tastes it to be sure. (I’m sure it tastes it like cough syrup, but each to her own.)

Jeffrey runs to his desk, just as Ina is bringing in the cocktails. Whew! Who knew he was so fleet of foot? She plays the DVD for him of their life together – many clips of them on her show. They note that the common theme is that he’s kissing her and she’s putting food in his mouth. There’s a picture of the orange tent.

Ina adds the meatballs to the soup. They DO look good. She adds fresh dill and a huge pile of baby spinach leaves, which will cook down.

This is her idea of a perfect anniversary. Quiet, cozy, just the two of them…oh, yeah and the hundreds of thousands of eyeballs watching.

She grates a bit of fresh Parmesan on top of the soup. She serves him. WOW, it does look good. He really loves the DVD.

He’s excited by the brownie pudding and suggests they eat it outside…Wink, wink…She serves it a la mode. She sees the tent and can’t believe he put it together himself.

Jeffrey gets into the tent. Ina follows and starts to knock the whole thing down, with both of them laughing uproariously. Be careful, you two crazy kids, you don't want to spill the brownie pudding. The last shot is the two of them under the flap of the tent…and she’s advising us, “If this tent be rocking, don’t be knocking.” INA! How naughty…what a perfect 40th anniversary! Jeffrey, a tent under the stars AND brownie pudding!
Posted by Sue on 2/22/2009

Wow! I can't believe she said that. That seems risky for Food Network...

That soup sounds delicious. I've never had Italian wedding soup before. The butter-thing in the brownie recipe is strange.

I'm going to have to make your brownies! I'm checking out the recipe.

Ina and Jeffrey ~ my favorite couple . . . can you even imagine them having a fight? The real mystery of their marriage is why Jeffrey doesn't weigh 300 pounds! And I'm on my way with Emily to check out your brownie recipe.

I'm hoping for something more than a tent for my 40th wedding anniversary...

Kevin and I like to say the secret to our marriage is a second bathroom.

I must check out your brownie recipe now.

Hahahah I think Ina and Jeffrey are amazing and I love their repoire on the show! Great website, I'll definitely come back often!!!

I love watching the anniversary shows. Jeffery is the most adorable thing ever.

One funny thing to me was that she said something when making the chicken meatballs about how no one needs to stand over a skillet and fry the meatballs when they could just be baked. Her famous spaghetti and meatball recipe is all about the frying!

Her comment about the butter in brownies was hilarious.

Her comment at the end in the tent totally gave me the heebie jeebies.

I bought the book a couple of weeks ago and I've been planning on making that soup. I was also surprised about her method of cooking the pasta--cooking it separate is one of the first things I can remember my mom teaching me in the kitchen.

Yes, Em,
It was definitely an X-rated (okay, these days maybe a PG-13) moment.

That soup does sound good.

Let me know what the head of Brownie U thinks of the brownie recipe.

Sheila,
I'm with you. I think I'll start saving up for those tickets to Paris right now.

Rach,
That's funny. I like saying I married my husband for better or worse...but not for lunch!

I want a brownie report.

Hi Teanna,
Welcome! Come back and see me again!

Hi Calm One,
I do love Jeffrey. Can you imagine the two of them ever saying a harsh word to the other?

Good point about the meatballs. Maybe she baked them, because she's trying to make everything easier this season.

Meleyna,
Probably Ina was just swept away by the passion of the moment AND the brownie pudding.

Your mother is a very, VERY wise woman.

It's funny how people do different things. My Grandmother always cooked the little tiny pastas/rice in the soup or stock. Maybe it's a jewish thing.

Hi Carole,
Of course, cooking the pasta in the soup gives the pasta more flavor. BUT I can't away from the fact that it wastes so much soup that you're left with more of a "stoup". (SORRY, but it does describe exactly what I'm talking about.) I wonder what Granny would have said if you had brought that to her attention. She was probably so busy with a million other things that throwing the pasta quickly into the soup was the way to go.

OMG! I just spent 30 dollars for campari and all the stuff to make the drink and it was putrid! My husband says he just got cough syrup that tastes better!!! Ugh! Ina got me again....I tried William Curley chocolates and they sucked...tasted like bleach. We didn't have to pay for them....thank god.

All rights reserved. Please don't use my photos or other content without my permission.